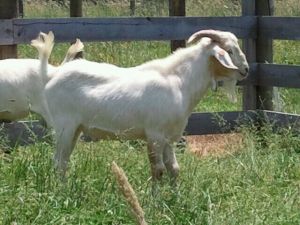 These bucks were born in April 2011 and have been growing rapidly ever since. 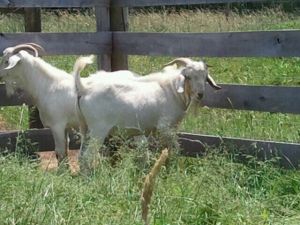 A friend of mine has two nice Sire prospects ready to go for you breeding needs. These guys were born in April 2011 and are very nice, well built bucks. Their Sire is a Kiko buck and their Dam is a Boer Doe. He is asking $400.00 each for these bucks but will take offers or discount if both are purchased together. His name is Chuck and he can be reached on his cell at (304)677-3239.  I have had the wrong phone number on here for weeks!

Hybrid Vigor which can be defined as an increase in the performance of “hybrids” over that of purebreds, most noticeably in traits related to fertility and survivability. From our personal experience, we’ve been very impressed in our breed up program when we’ve mated our NZ Kiko Buck to Fullblood Boer does. Those kids tend to get the best of both breeds. The kids always seem to chase down the dams for milk much quicker than the contemporary Boers. They also grow faster than the Kikos and have been much hardier and healthier than the Boers.

I’ve been to Chuck’s farm on many occasions and can attest that he has a very healthy herd of goats. I actually saw these 2 bucks last week and thought they were much older than a year based on their sheer size alone. They were in the pasture with their Sire, who is a very good representative of the Kiko breed himself, and they were 2/3rds his size already. These goats are on pasture and have never been pushed with grain. They simply got this big this fast because they were bred right. They can help out your herd by bringing the parasite resistance and feet of the Kiko breed along with the higher weight gains from their Boer influence. 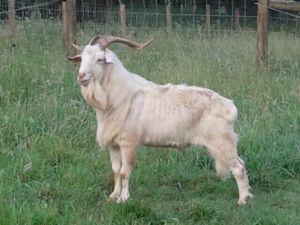 Their Sire pictured above is also available for sale. He is an unregistered PB Kiko Buck. Bottom line, if you’re looking for a good Commercial Buck (or two) and aren’t concerned about papers then you should give these guys a shot.